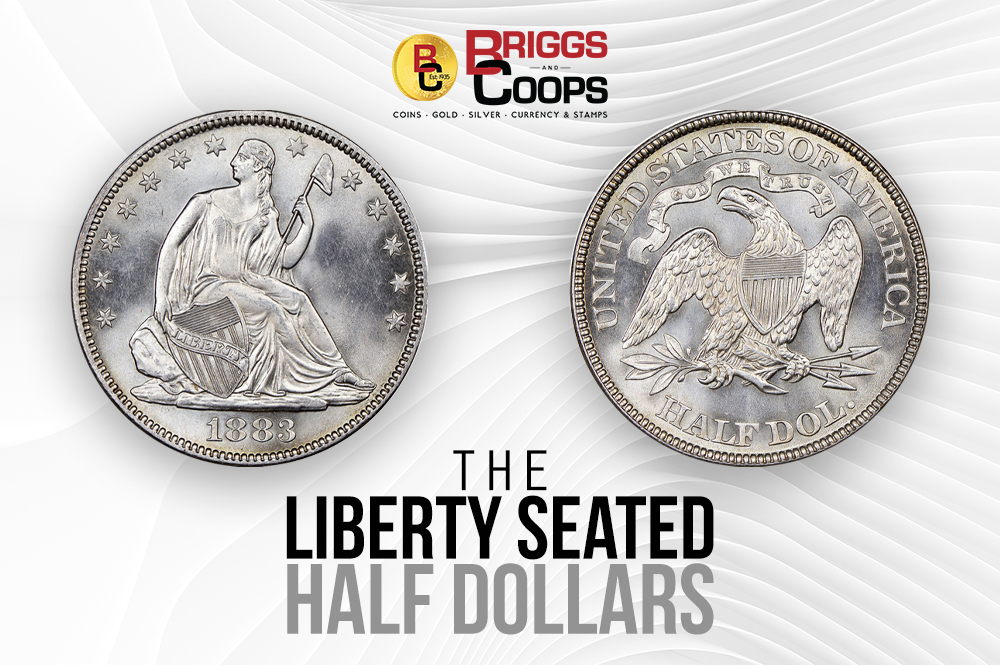 Christian Gobrecht designed the Seated Liberty Half Dollar. The design was based upon Britannia which had been heavily used in British coins. It was minted from 1839 to 1891. There were several variations in the design that denoted various changes that were made to the currency over the years, specifically, in the amount of silver that was used in the coin. During the 1850s, silver prices were rising. It was in such demand that the public was melting their U.S. silver coins (including the seated liberty a half dollar) because the silver in the coin was more valuable than the face value on the coin itself. To prevent this from continuing, the government reduced the amount of silver that was used in the coin. That change was shown in arrows that were placed next to the date, and it was also demonstrated in rays around the eagle on the reverse of the coin for a single year. Later on, the silver content was increased in the coin, and arrows again denoted that change next to the date.

The Seated Liberty Half Dollar has a rich and exciting history making it an exciting addition to your collection. Coin making at this period was still mainly by hand, and relatively expensive, so the mints tended to use coin dies until they fell apart and sometimes re-punched a new date on last year's dies to get a little more life out of them. Also, during the Civil War, the Confederacy took over the New Orleans mint and issued coins which used the same dies as Federal coinage, but is technically Confederate coinage. Their age makes them a little harder to come by in good condition, but the design has more interesting variations than anything made in the twentieth century, and they generally cost less than coins with similar mintages in the twentieth century because no one knows they exist to collect.

We currently have a seated liberty half dollar in our store and would love the chance to show it to you. Please feel free to stop by and see this fascinating coin.