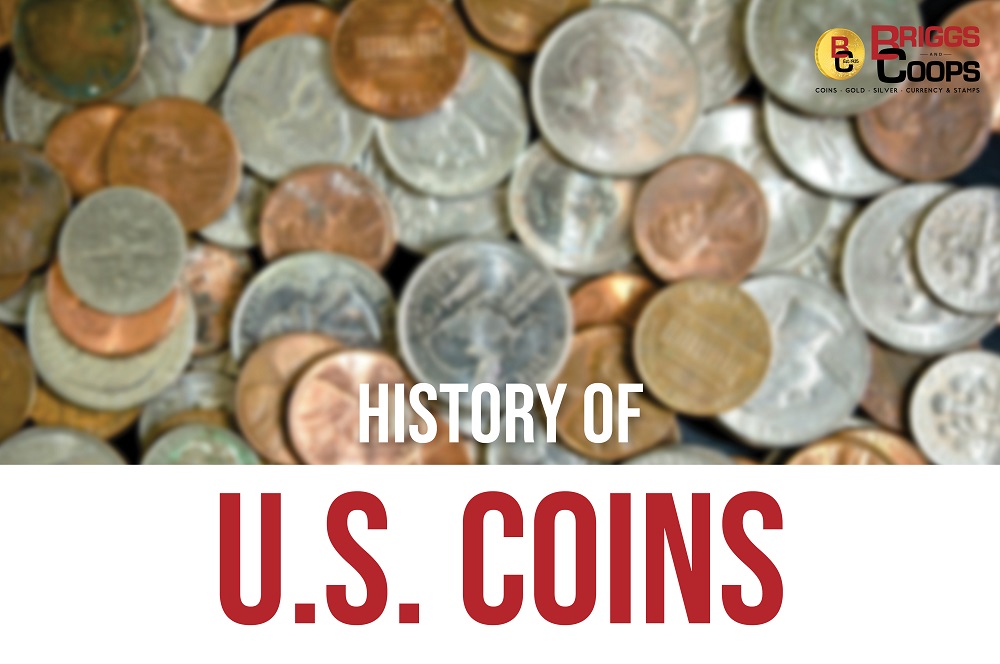 In a world of credit cards, Apple Pay, and automated billing systems, it’s hard to recall a time in which we relied on coins. But for the greater portion of history, we exchanged goods and services with the change in our pockets. Coins are believed to have been introduced as a method of payment in the 6th or 5th century BCE. And since their inception, they have beautifully marked economic, mining technology, and political history.

Coins were used as proud depictions of identity among nations and rulers across the world for thousands of years. And even in our young country, they represent the values of freedom and liberty on which our nation was built. This is the story of how they played an admittedly disorganized, yet significant role as the U.S. gained its freedom and made its identity:

The History of Coins in the U.S. According to the U.S. Mint:

The first national Mint was built in 1792. However, coins in America began their story long before then. Much like its proud, yet hodgepodge heritage, the U.S. first circulated coins from several different countries. During the colonial period and for some time after the Revolutionary War, a mix of coins from Great Britain, Spain, Germany, and even some made by the colonies, took part in the U.S. currency.

In the years following the Revolutionary War, the Articles of Confederation governed the country. Their leadership allowed each state to make and assign value to their own coins. This, of course, caused confusion as no coin was worth the same amount across states. However, such a failed idea, among several others, was met with the first sign of order in 1792 with the Coinage Act that established the first National Mint in Philadelphia.

The first National Mint produced currency modeled after the Spanish Milled Dollar which was organized by decimal coinage in parts of 100. Coins and their corresponding materials were divided as follows:

The first circulating coins were produced on March 1, 1793, welcoming 11,178 copper cents into U.S. circulation. Upon this success, states were no longer permitted to generate their own coins. However, foreign currencies maintained their usefulness until the U.S. Mint was able to meet the demands of the growing nation.

The Design of the U.S. Coins:

Today, we commemorate George Washington, Thomas Jefferson, Abraham Lincoln, Franklin Roosevelt, and John F. Kennedy on our U.S. coins. However, honoring past leaders was not always in vogue for American currency. The Coinage Act of 1792 specified that all coins should have an “impression emblematic of liberty,” the inscription, “LIBERTY,” and the coins minted year. And to accompany these requirements, coins included the face of Lady Liberty for their first 150 years. Refraining from using the faces of presidents was done so not to resemble the minting practices of Great Britain which featured monarchs on their coins. It was not until 1909 that Lincoln replaced Liberty on the penny. He was succeeded by several other presidents to replace her face on coins. And in 1947, she made her last appearance on the Walking Liberty Half Dollar.

Despite its humble beginnings in coin production, the U.S. solidified its identity with the face of Liberty. And with this symbol, Americans were reminded of the freedom for which they fought and later enjoyed. Coins can represent such values and ideals of an entire nation. That’s why we at Briggs and Coops are crazy about coins! If you’d like to know more about the world of coin collectingor you simply enjoy learning about history through this fascinating lense, stop by our store today!